This is historical material, "frozen in time."
The web site is no longer updated and links to external web sites and some internal pages will not work.
Donald L. Kerrick Biography 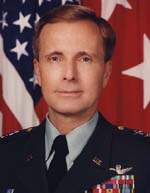 Lieutenant General Donald L. Kerrick became the Deputy National Security Advisor to the President of the United States in July 2000.

Prior to becoming the Deputy National Security Advisor, Lieutenant General Kerrick served as the Assistant to the Chairman of the Joint Chiefs of Staff from August 1999 to July 2000. He served at the White House as the Deputy Assistant to the President for National Security Affairs from January 1997 to August 1999. In 1995 and 1996, Lieutenant General Kerrick served as the Director for Operations for the Defense Intelligence Agency where he directed the Defense HUMINT Service and the Defense Attache System. In 1994 and 1995, he served on the White House's national Security Council as Director of European Affairs, where he was responsible for developing and managing United States policy in Europe, including the former Yugoslavia and the North Atlantic Treaty Organization. He also served, by Presidential appointment, as the White House and National Security Council representative on the United States' Balkans Peacekeeping Delegation that concluded a peace accord ending the Balkan conflict.

Lieutenant General Kerrick has extensive foreign service with two tours in Germany in Berlin and Augsburg, two in the Republic of Korea both at Camp Humphreys, and one in Thailand at Ramasun Station, and in Saudi Arabia while assigned to Third Army, the Army component of United States Central Command.

Lieutenant General Kerrick was commissioned a Second Lieutenant in the United States Army upon graduation from Florida Southern College. He holds a Master of Science Degree from the University of Southern California. Military education includes the Armor Officer Basic Course, the Military Intelligence Officer Advance Course, the U.S. Army Command and General Staff College, and the National War College.